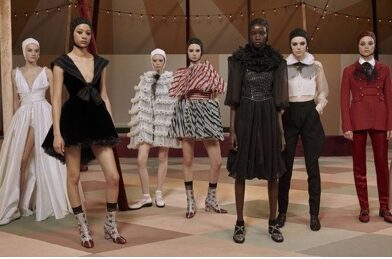 In an era defined by attention-seeking, pop-art inspired designer clothing, where immediate brand recognition and camera-readiness take precedence over the quality of a garment, it is easier than ever before to dismiss the work of a designer or creative director who values the depth and integrity of a piece of clothing more than its ability to make a fleeting impression on the street.

Viewed primarily through YouTube videos and Vogue Runway stills, it is the designers who give deference to the feel and sounds of a garment, qualities which cannot be captured by photography, who are pushed to the periphery of the collective sphere of fashion, while monogrammed tracksuits and logo-covered handbags are showered with seemingly endless affection. And, while I dare not claim complete immunity to logomania, in writing this article I hope to pique interest in the less considered aspects of clothing, such as texture, sound, and context.

One lovely fall afternoon, desperate to avoid schoolwork, I wandered into Powell’s Bookstore on 57th street and went to the fashion section, where I happened upon two photo-books by the accomplished Juergen Teller for Nicolas Ghesquière at Louis Vuitton. Flipping through the pages of Season Three, which documents Louis Vuitton ready-to-wear from 2015, I became lost in the intense textures and sculpture of the garments which could only be thoughtfully appreciated in these intimate, close-up photos or in person. The difference between viewing Ghesquière’s work this way and viewing it through somewhat anticlimactic YouTube videos or stills was dramatic; this series of photos transformed an indifferent viewer of Ghesquière’s work into a bonafide fan, and led me to become a regular window-shopper along Chicago’s Rush and Oak streets, where I began to examine and understand the three-dimensional, layered beauty in Maria Grazia Chiuri’s couture, and felt the magnificent texture of Goyard’s eponymous Goyardine canvas. In the case of M.G.C.’s work at Dior in particular, critics have been quick to point out the apparent lack of visual excitement and engagement that her couture offers to viewers, forgetting that couture is first and foremost designed and constructed for the sensorial enjoyment of the wearer, and as such the time needed to create these intricate garments can easily exceed 140 hours. It seems, though, that by and large, the public fails to acknowledge the process and simply critiques the raw visual impact of the final product, and this is perhaps the most devastating symptom of the emphasis on visual excitement in fashion.

This tactile exploration of carefully considered textures and sounds in clothing put me on the path toward finding other brands that held often-overlooked qualities of clothing in high regard. The work of Japanese designers like Keisuke Konda, who once famously used rice bags to create clothes with unique textures, and Mint Designs, a brand which emphasizes the unique qualities of different fabrics and textiles rather than focusing primarily on the form and cut of a garment, as is the modus operandi for both European and American designers. In focusing on the process of garment construction itself, which necessitates considering every facet of a piece of clothing equally, avant-garde Japanese designers in particular, Rei Kawakubo and Issey Miyake among them, have excelled in reframing what makes a piece of clothing remarkable.

As my search for clothing and designers that seek to connect with their audience on a deeper level than simply visual continues, I encourage those who make quick judgements about a designer’s talent based on photos or videos to visit one of their boutiques in person or at the very least consider the context and complexity of their creations before writing them off; after all, who knows how many wonderful designers and garments we have dismissed in the past simply because we were too lazy and dismissive to consider them for longer than the runtime of an FF Channel video? While the world around us becomes ever more digital and streamlined, it is more important than ever before to advocate for quality, texture, and variety in fashion.