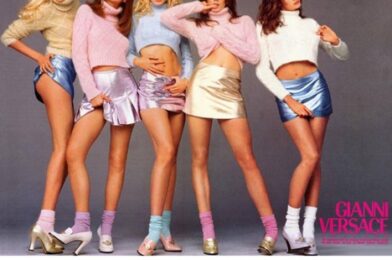 Right now, the fashion community is coming out of a significant period of time in which newness and futurism were key selling points and design inspirations; from new trends like designer sneakers and celebrity collaborations with established watchmakers to the monster of fast fashion, it’s safe to say that we have been conditioned to expect new designs and trends from the fashion sphere on a near daily basis. And, while one could argue that this constant release of new products has its merits, I want to focus on the fact that this way of life has led an entire generation of fashion admirers to unflinchingly look forward, rarely pulling from fashion’s long and illustrious history to find style inspiration. In my opinion, and one which is held in common with many of my peers, this phenomenon of constantly looking forward for design inspiration has led to a proliferation of unimaginative, drab, and forgettable movements and collections in fashion. However, thanks to recent international interest in vintage fashion, young people immersed in the world of clothing design are beginning to rediscover fashion’s most iconic moments through dedicated vintage instagram accounts, physical vintage stores, and resale apps, and this has led to renewed interest in creating collections which are been unabashedly inspired by the past. In this piece, we will honor the social media accounts and stores which have made this revolution possible in part to give credit where credit is due, and in larger part, to inspire our readers to look back in addition to looking forward.

Before listing the vintage accounts which offer items for sale, I thought it more appropriate to point readers in the direction of several accounts which exist for the purpose of reminding us just how great the last 20-30 years in fashion were. Though I’m sure many accounts of this sort exist, I will highlight my favorite three, starting with @diorbyjohngalliano. Being partial to Dior when it was under the creative direction of John Galliano from 1996-2011, I am definitely biased in saying that this account is the best of them all; with campaign ads, runway clips, runway photos, and highly detailed captions, this account which boasts over 61 thousand followers is truly exemplary. In a very similar vein, the next account worthy of your follow is @diorinthe2000s. Because Dior was under the creative control of Galliano throughout the 2000s, many of the images on this account have a similar look to those found at @diorbyjohngalliano and have very detailed captions as well. One large difference between the two accounts, the difference which I think makes them both worth following, is that @diorinthe2000s focuses much more on Galliano’s ready-to-wear contributions than @diorbyjohngalliano does. The final archival account that I am enthralled with is @datewithversace, an account I credit with engendering my love for the house of Versace; this account mainly posts ad campaign photos, though it also sprinkles in action shots from the runway, and it does a great job highlighting the golden age of Versace beginning in the 1990s. Perhaps what’s even more exciting about this revival of love for vintage fashion is the rise of physical and online shops which deal exclusively in rare, historic pieces.

Even before Kylie Jenner and her friends began posting photos of themselves wearing vintage Chanel and Dior pieces on yachts in exotic locales, instagram accounts like @pechuga_vintage and @whatgoesaroundnyc (whose Senior Vice President is @ambriany and whose Head Luxury Buyer is @paigerubin) had been revisiting, collecting, and selling iconic and rare pieces from fashion’s past. Through detailed photos, descriptions, and captions, these instagram accounts and many more use the profession of vintage luxury resale to introduce younger generations, and remind older ones, of the daring, provocative, and extravagant clothes and accessories of the 1990s and 2000s. For those of us who like to interact even more intimately with vintage pieces, there are rare shops like @treasuresofnyc in New York’s NoHo, which has a small physical space in which to look at, touch, and buy unique pieces from brands like Chanel and Dior, also boasting a fashion themed coffee shop on the ground floor of the building (@coffeenclothes).

It would be easy for a person to spend hours getting lost in the feeds of these instagram accounts as I often have, and it is my honor to share them with you. Now that the fashion world has once again recognized the value of its past, we can all look forward to more engaging collections which succeed in uniting the past, the present, and the future. 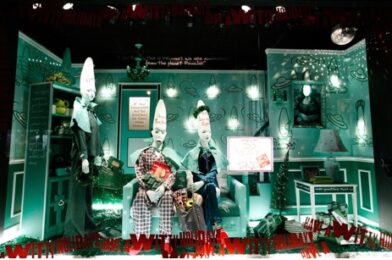 At a cursory glance, it’s easy to dismiss the fate of Barneys New York as just another department store lost to the ruthless and unstoppable advance of online shopping and overnight shipping. Though many shoppers might liken Barneys to a number of other high end department stores like Saks Fifth Avenue, Neiman Marcus, or Bloomingdale’s, Barneys carried a heftier cultural importance, acting as a hub to connect celebrities, aspiring designers, and creative minds alike. It is with the golden era of Barneys New York in mind that we honor it with this swan song.

Opened in 1923 as a designer label discount store for men at the intersection of 7th Avenue and 17 Street in Manhattan, Barneys, named after its founder Barney Pressman, grew rapidly and eventually opened a women’s department in the 1970s. In 1993, Barneys once again created waves in the high-end department store scene with the opening of their then-new 230,000 square foot flagship location on Madison Avenue in Manhattan, but the news wasn’t all good. Just after the opening of the new flagship store, customers and window shoppers began complaining about an atmosphere of prideful exclusion and unattainability which was reflective of Barneys tone deaf approach to luxurious living at this time. Unsurprisingly, Barneys’ inability to reflect the values and desires of its customers led the brand into its first bankruptcy filing in 1995, resulting in significant downsizing and the closure of two stores in Texas and one in Michigan. Though Barneys began to rebuild itself in its former image after coming back from the brink of extinction for the first time, the store was placed under new management in 2010, management which amplified the commercial aspects of the business without also elevating Barneys defining quirky qualities. After 9 more years of alienating themselves from consumers and those who loved Barneys as one of New York’s most important cultural icons, Barneys New York filed for Chapter 11 bankruptcy for the final time, in August of this year, citing, amongst other causes, unreasonable rent and low foot traffic. But despite the unfortunate ending of Barneys New York, there is much to celebrate about the storied luxury titan.

Perhaps its greatest contribution to fashion, Barneys New York consistently gave a voice and a platform to unique, emerging young designers and had a pivotal role in launching the careers of people like Giorgio Armani and Rick Owens. In fact, throughout most of its glorious history, Barneys defined New York fashion more than any other department store. After all, it was Simon Doonan, brought onboard in 1986, who designed Barneys’ now iconic window displays, elevating the craft to the art sphere, and injected the store’s spaces with whimsical, and sometimes outright comical, displays and curated items. Barneys, and Neiman Marcus to a lesser degree, has always been a place where one could shop from storied and established fashion houses whilst at the same time discovering new and daring brands. It was, in part, this atmosphere of the unexpected and perpetually exciting that made Barneys a social hub for celebrities and socialites the world over. Barneys was as much a destination for shopping as it was a destination for making new friends and meeting old ones, and this simply doesn’t ring true with the other noteworthy players in this space such as Neiman Marcus, Bloomingdales, and Saks Fifth Avenue. All of these stores, which have succeeded in fulfilling the basic functions of selling luxury clothing on a large scale, have failed to create a brand identity as strong as Barneys.

So, having been bought by Authentic Brands Group and B. Riley at a cost of over $271 million, Barneys inventory is currently being liquidated at all of its open locations. In recent weeks, people have inundated store in droves to take it all in one last time, doing everything in their power to remember the sights, sounds, and smells of one of the most culturally impactful stores in New York. The spirit of Barneys will always live on, especially as so many now established brands have the store to thank in part for their success, but also because of the many passionate fans who refuse to let the memory of Barneys fade. If you find this news painful as I do, I suggest following @thespiritofbarneys on instagram, or visiting Saks Fifth Avenue who apparently secured the rights to the Barneys name and may have plans to open mini-Barneys’ inside several locations. One thing is certain—Chicago’s Oak Street, home to our local Barneys location, will never be the same.