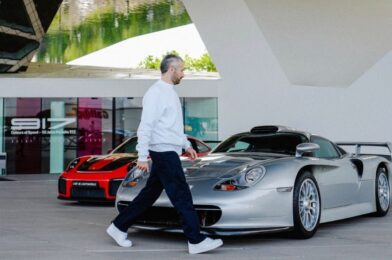 Every now and again I have the opportunity to pour onto paper an idea that I think is truly new to the fashion industry. I love covering trends, art exhibits, and the ins and outs of high end fashion, but when something that is truly new emerges, my giddy excitement for the world of clothing is ignited anew. Having deep passion for both clothing and rare cars, L’ART DE L’AUTOMOBILE is a particularly exciting addition to the high end streetwear market, the automobile collector’s market, and to car/fashion culture more generally.

Given my disposition toward couture and high end ready-to-wear collections from established designers, it is surprising even to myself that I would be writing about a streetwear brand that, in addition to selling million dollar vehicles, produces t-shirts, hoodies, and stickers emblazoned with pop-art and brand logos. Yet L’ART is appealing to me and to many other people who would not classify themselves as streetwear lovers at least in part because the company has tapped into a genuine sense of community grounded in their deep roots in Parisian automotive culture, and this community makes itself known both online and in the streets (cars from Paris to Manhattan can be seen brandishing L’ART insignia).

Having crafted for itself an image of carefree yet glamorous youth through an Instagram page boasting more than 125k followers, among them Kendall Jenner, Tyler, The Creator, and automotive royalty Ted Gushue, L’ART DE L’AUTOMOBILE has secured its rightful position in the garment industry and in the car scene.

The level of success that L’ART has attained as a purveyor of apparel is impressive when one considers that its first collection of clothing became available only in 2016. Certainly, having a pre-existing loyal customer base and a cult following among celebrities, as is the case for the brand’s founder, the legendary Arthur Kar, can help get a project off the ground, but the leader of such an idiosyncratic endeavor would have to offer something that was properly unique to the fashion industry, and Kar found his niche.

Our current moment of fashion is one of ascetic minimalism; from Loewe to Bottega Veneta to Celine, our culture is awash in tones of beige, gold, white and black, and subdued prints and patterns. While there are many things to be gained from minimalism in fashion, especially for older buyers, it is certainly the case that younger people want to lead a more laid back, rebellious and emotional existence, and eye catching, highly contemporary streetwear that appeals to younger and freer sensibilities can offer that.

Following from its highly stylized Instagram account, L’ART’s apparel designs are cheeky, outrageous, and profoundly in tune with the mix of grunge and glamour that so appeals to teens and twenty-somethings. A quick browse of their apparel site reveals t-shirts featuring burning cars (an unmistakable reference to a million dollar Ferrari F40 which burned to the ground in Monaco just this year), stickers depicting a Mercedes Benz G-Class on cinder blocks after having its wheels stolen, and even Vans sneakers that the famous footwear company produced in collaboration with L’ART.

The brand has become so popular that it is now regularly available at Dover Street Market, Slam Jam, Notre, and The Broken Arm in Paris. A testament to the brand’s overwhelming success, and my personal frustration, can also be gleaned from the fact that the apparel website is frequently sold out.

Launching a streetwear brand is a rather precarious endeavor in a time when the market for logo tees and shockingly priced basics is more than saturated, but L’ART DE L’AUTOMOBILE proves that one can still succeed in the space if one’s brand is authentic, savvy, and hyper aware of the condition of young people around the world. In this sense, L’ART is a refreshing take on a recent yet already tired tradition, and it is also a sign of things to come. 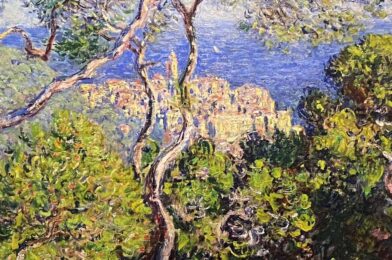 The Art Institute brings to light the rich history between Claude Monet and the city of Chicago in a dazzling exhibition.

Claude Monet casts such a grand shadow in the history of European art that the very mention of Impressionism invariably conjures images of Monet’s water lilies, garden scenes, and landscapes before it brings to mind any other artist. In fact, the very term “Impressionism” comes from a Monet work titled, Impressionism, soleil lavant. Impressionism as an art form dominated Europe in the latter decades of the 19th century, and it has found its footing in the 21st century in large part thanks to Monet who, above other equally talented Impressionists such as Pierre-August Renoir, Camille Pissarro, and Paul Cézanne, seems to have captured the imagination of young art enthusiasts. Despite all of the credit due to Monet, one must wonder how he, a fiercely European artist, can be so implicated in the history of Chicago’s art scene that The Art Institute of Chicago would name their current Monet Exhibition Monet and Chicago.

Figure 1 Detail of The Banks of The Fjord at Christiania, 1895.

In actuality, Claude Monet owes much to Chicago and The Art Institute owes much to Monet. This notion is quite curious when one considers that Monet purposely avoided ever traveling to the United States, disliked Americans, and believed that Paris was “the only place where there is still a little taste.” However, French Impressionist artworks landed in Chicago through Thurber’s Art Gallery as early as 1888—among the works on display, Monet’s were noted to be the best. Of this event, an 1888 Chicago Daily Tribune quote that hangs prominently in the new exhibition states, “Why go to Paris when Paris has to come to Chicago?” Perhaps it was this brash American self-importance that kept Monet from ever setting foot in the United States; fortunately, our Americanisms were not enough to keep his paintings out of North America. In 1891, after another showing of Monet’s work in Chicago, prominent local collectors Bertha and Potter Palmer acquired 20 of Monet’s works in a move that would start Chicago’s insatiable appetite for Monet and eventually lead to The Art Institute’s outsized collection of Monet paintings and drawings, the largest in the world outside of Paris. Following the Palmer’s acquisitions, The Art Institute hosted Monet’s first-ever solo show in America in 1895, titled 20 Works by Claude Monet. Later in 1903, The Art Institute became the first American museum to purchase work by Monet which only furthered donations and acquisitions. The mutually beneficial, if partially reluctant, relationship between Claude Monet and Chicago’s art scene is surprisingly profound, and this historical context is not lost on Monet and Chicago.

Without giving away too much information, as I think this show must be seen in person to be fully appreciated, I must say that Monet and Chicago is a landmark exhibition. With over 70 paintings and drawings by Monet, spanning some of his most famous series as well as much of his lesser-known work, the exhibit is a true tour de force, and the difficulty in coming by tickets attests to this fact. What is particularly remarkable about this exhibition is the broad sampling of Monet’s subjects and artistic eras, a luxury afforded by the sheer number of works on display. Visitors are charmed into the countryside, streetscapes, and gardens of France, elevated to the sublime in masterful depictions of the Italian Riviera, sunk deep into contemplation in Norwegian snowscapes, and placed in the middle of a train station bustling with life in Paris.

Yet, even as viewers gaze with deep admiration at the layers of seemingly haphazard brushstrokes that define the works of Monet and many other Impressionists, the tumultuous nature of Monet’s personal life cannot be ignored.

Literature such as A Day With Claude Monet in Giverny by Adrien Goetz suggests that Monet exhibited manipulative tendencies towards his children and his wives, viewing them more as accessories to his life and less as autonomous human beings, but he was plagued by other issues as well. Monet wanted to live an aristocratic lifestyle marked by extensive travels, grand homes, and impressive gardens, but his financial reality throughout much of his life prohibited this. Among the cities he was forced to abandon on account of insufficient funds are Paris and the popular haute bourgeoisie resort town of Trouville on the English Channel, both places in which he lived for work but also for the opportunity to interact with the fashionable and wealthy elite.

Figure 4 An entire room in Monet and Chicago is dedicated to several works from Monet’s Haystacks series.

But one’s luck sometimes changes. After the tragic deaths of his first two wives, Monet and his family set down roots in a rented house in the French countryside town of Giverny in 1883, then known for its small but growing arts scene. At just this time, Monet’s Impressionist masterpieces began to gain commercial traction, and Monet was able, after seven years of renting, to purchase his house in Giverny along with its gardens. It was here that, after endless manual and intellectual labor, Monet was able to construct and paint his famous water lily pond and its surrounding gardens. Beginning in the late 1890s and ending in 1926 with his death, Monet painted more than 300 scenes from his garden, including his essential Water Lilies series and the Les Grandes décorations series.

By the time he died aged 86 in 1926, Monet was both well-known and financially secure, forever altering the course of European art production and American art consumption. Despite his best efforts, Monet became a perennial hit with Americans, who continue to flock to exhibitions of his work with marked excitement, and of these exhibitions, Monet and Chicago is inarguably one of the best. Monet and Chicago is on display at The Art Institute of Chicago until June 14, 2021, with separate exhibition tickets being sold in addition to general admission tickets online at https://www.artic.edu/.